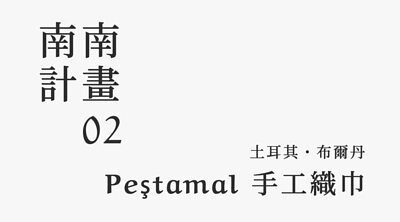 Unlike the functional, technical textiles nowadays, the handwoven Peştamal is by far, simply cloth. The handcrafted texture from Buldan weavers makes the unprocessed fabric a hit item and popular among young generations and families. Its simplicity keeps the traditional and authentic craftsmanship that lasts hundreds of years. For over eight hundred years, the Buldan weavers had made clothes for sultans, royals and nobles. Time changes and now they customize fabrics for Hollywood costumes. The Peştamals are their signature textiles. 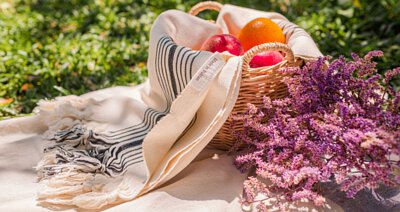 The peştamal's function is not specified and thus used in every possible, individual ways. It can be seen indoor, outdoor and in travel. It can be a shawl, a scarf or wraps. More people use it as meditation or yoga mat or take it to the beach and picnics. Travelers like it because it is light-weighted, quick to dry and easy to carry around. The classic patterns make it perfect for office blanket or decoration for sofas and tables. 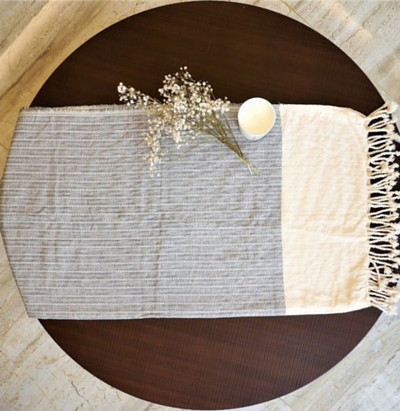 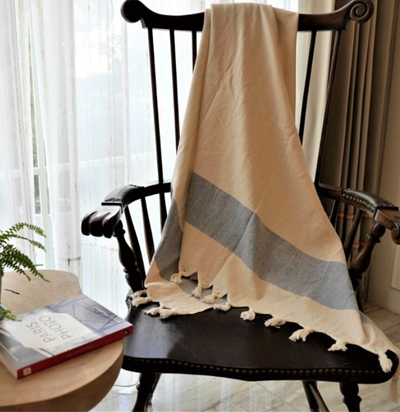 Buldan, the Weaving Capital in the hillsides

Along the uphill stone-paved road, looms can be heard from the houses. The clapping of the treadles sound like the pulse of the weaving town. Buldan is situated in Denizli province in the southwest of Turkey and near the Aegean Sea. There are still ruins of the Tripolis, where the first looms were established.

The ancient city was built in the 6th century B.C, conquered by Alexander the Great and became kingdom of Bergama. Weaving started during this time, but was not developed until the first century under Roman rule. The ancient city of Tripolis now becomes ruins, where the streets, the colosseum, the amphitheater and the thermae from Roman imperial and Byzantine periods are still kept. Buldan's weaving had been known since Roman period and almost every citizens were in the weaving business. 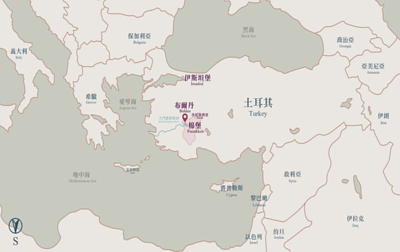 There are two UNESCO World Heritages sites nearby Buldan. The Cotton Castle, Pamukkale and the Büyük Menderes River. They are the foundation of the Weaving Capital. The cotton castle is known for the cotton-white travertine terraces and it is also located in Denizli province and the Aegean region, an important cotton origin in Turkey since ancient times. The Büyük Menderes River connects inner Turkey with the Mediterranean Sea and allows the transportation of goods. Large quantities of textiles from Buldan can thus be transported to all the other places. Not only through waterway, the powerful and wealthy Ottoman Empire also controlled the land transportation and further spread the textiles. 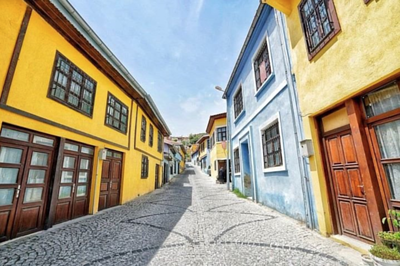 The Buldan weaving was finally famous in the end of the 13th century, right after a wedding of the century. The sultan Bayezid I (1389-1402) commanded the Buldan weavers to make his wedding robes, the kaftans. Ever since then the Buldan textile had been well-known to Eurasian caravans.

The legendary Moroccan overland traveler, Ibn Battutah, once described the textile trading and weaving art craft, “The bustling market in the big city sells refined cloth with golden lining. It is of the superior quality and extremely durable because of the local premium cotton and strong yarn.”

The sultan, Bayezid I and his kaftans (Source: Non-western Historical Fashion)

In the prime time of the Ottoman Empire, the royals led a luxurious life. Buldan is the source of their fabulous attires. The shawls and kaftans made by the local craftsmen were versatile and fashionable. They are in great demand among the nobles. It is also the prime time for Turkish textiles and Buldan had the most kinds of color, material and design options. It was no doubt the Weaving Capital.

The fame continues till now. Buldan weavers held on to their techniques and did not incorporate hand loom till the 60s, even though the machines and automations had already been introduces to all countries. They still relied manual works and automation was gradually adopted in the 80s. Now, hand looms still owned by 80% of the Buldan households. Most of the people still make a living by weaving. There are still a few large weaving mills and a small number of weavers stick to traditional weaving crafts, using hand looms and manually making tassels. Their style is adored by young generations and families in the U.S. and in Europe.

Buldan Peştamal was originally used in Hamman, Turkish bath.  “Peşt” means belly in Turkish and “mal” means the cloth to wrap around the body. Peştamal is essential in a Turkish bath because it is highly absorbant, dries fast, light and durable. Peştamal made by Buldan weavers is exceptional and becomes the signature of Buldan. 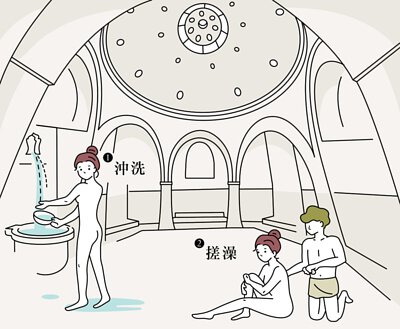 The Hamam is a fusion of Roman and Byzantine bath and has its own bathing culture. It is still significant in local life. More than 90% of Turks are muslims. Because of emphasis of hygiene in Islam, hamam becomes a ritual for body and mind cleanse. Hamams are thus often seen nearby mosques. Hamam also serves social functions. It allows people to relax in the hot steam, talking about politics and ecnomics, gossiping and make new friends. 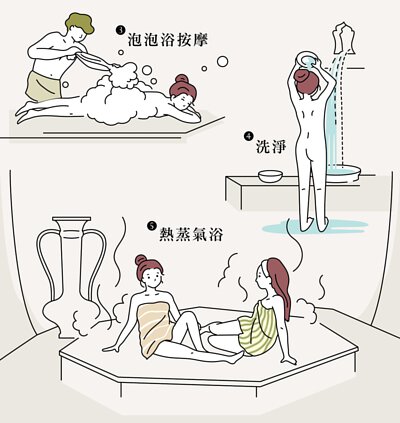 A traditional hammam is built near a mosque. In the middle, there is a marble platform, göbektaşi, surrounded by several "krunas", the pools with running hot and cold water. The bathing practices start with rubbing with keşe, messaging with bubbles and finishing off by washing. After that, people wrap themselves in the Peştamal, lying on the warm göbektaşi to dry up, chitchat and rest. 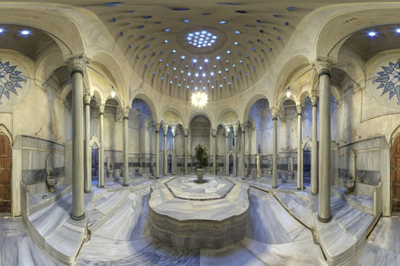 The two major textiles in Buldan is Buldan bezi, which is used in mattress and bed sheets, and the most famous peştamal. The traditional weaving technique is complex and time consuming.  The material is the Turkish cotton, linen and bamboo fiber. The original Buldan weaving is hand-woven. The daily productivity is around seven to eight pieces of peştamal. With a hand loom, a piece takes only twenty minutes and 20 of them can be made within one day.

𝟙  Dyeing: Dye the fibers with plants, such as gallnut, bay, walnut leaves, acorns, licorice, chestnut, onion skin and yellow berries of Rhsamnus petiolar. Every craftsman has unique process to make distinctive color. After  sun-dried, the fibers are to be wound on a spool.

𝟚  Spinning, yarn making: With a spinning wheel, twist the dyed and dried fibers into yarns of unified thickness. 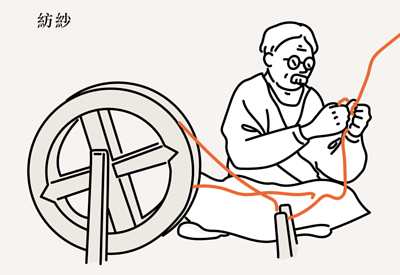 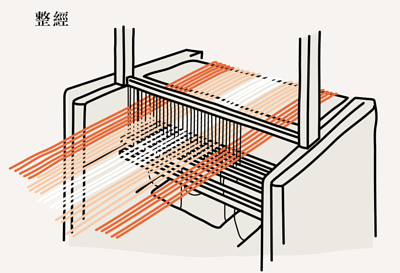 3. Warping: Draw out the threads from the rolled yarns and according to design, lay them in rows of specified length and numbers to form a whole piece. The paralleled threads tightly wound on the warp beam so as to generate the same tension and form longitudinal "warp".

1. The longitudinal warps are fixed in upper and lower rows. Between the warps, the horizontal wefts will be intertwined through process of shedding, picking, and beating-up.

2. The shuttle moved rapidly to guide the weft interlacing back and forth between different warps to weave into various patterns. The weaving technique in Buldan, the town's legacy still continues. The weavers use Tezgah, the handed loom in Buldan to weave. The weavers tread on the loom to drive the warps up and down, and pick the shuttle from left to right. 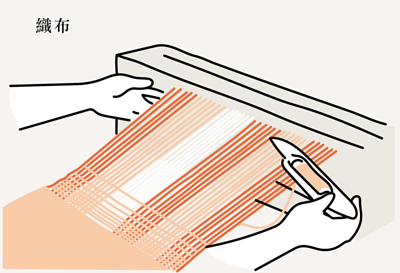 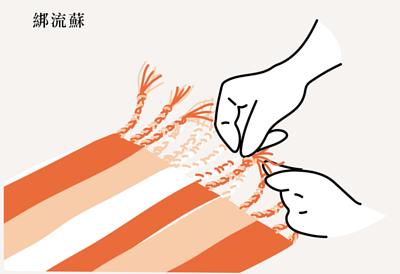 𝟝 Tassel finishing: After the weaving, the craftsmen rubbed the end of the thread and tie them into beautiful tassels. 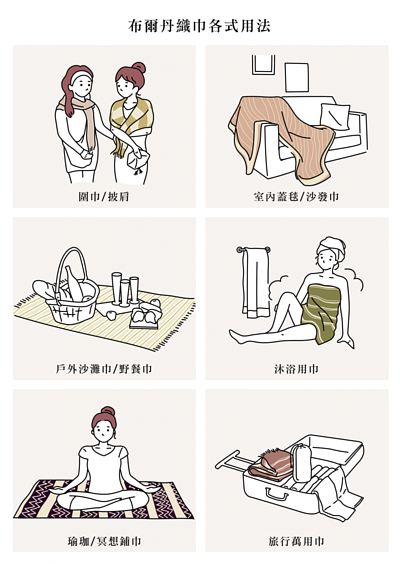 The peştamal's is multi-functional and used in every possible, individual ways. It can be seen indoor, outdoor and in travel. It can be a shawl, a scarf or wraps. More people use it as meditation or yoga mat or take it to the beach and picnics. Travelers like it because it is light-weighted, quick to dry and easy to carry around. The classic patterns are perfect for office blanket or decoration for sofas and tables.