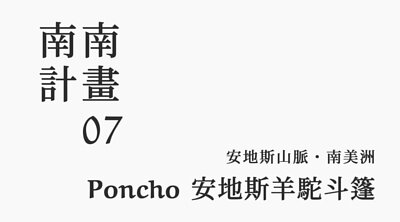 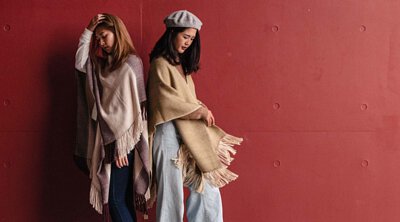 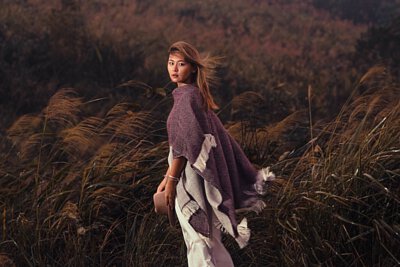 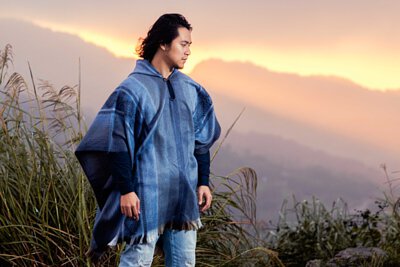 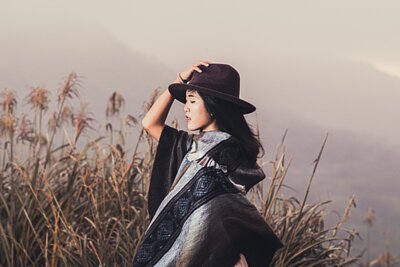 "Poncho" originated from the South American aboriginal culture. As early as 300 BC, in the Paracas culture in southern Peru, there have been ponchos. A poncho is a rectangular cloak that has openings and no sleeve. The patterns on ponchos include animals, birds, shaman rituals, warriors on the battlefield, etc. Most of them full of various ritual symbols. 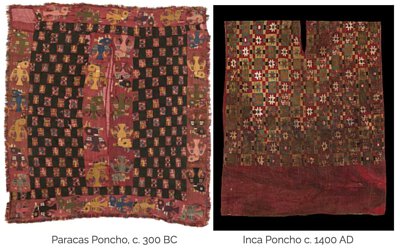 The oldest poncho in history, made in 300 B.C.  (Source: Invisible world)

A thousand years later, the rise of the Inca Empire promoted Paracas’s poncho culture to the entire Andes Mountains. At that time, the Incas used geometric patterns and brightly colored alpaca wool to weave ponchos. These designs showed the social status of the wearer in the Inca Empire. As time progressed, ponchos no longer belong to the royals and nobles. The design was already integrated into the life of the indigenous people in South America.

In the early years, the tribes of the settlements in the Andes, the ethnic groups in the Patagonia plateau and the Pampa grasslands lived a life of hunting and gathering in the wildness for a long time. The women thus used alpaca wool to make such practical and warm ponchos as outdoor menswear. They can keep out the wind and cold. In addition, they have a wide range of uses, such as raincoats, blankets, and pillows. 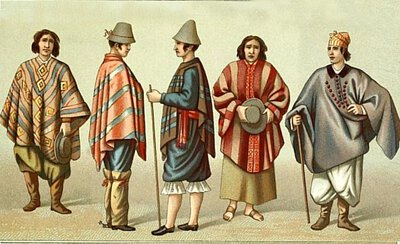 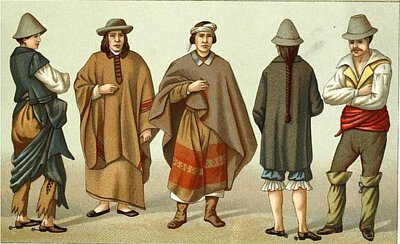 The culture of ponchos is inseparable from life. (Source: Pinterest)

Evolution of Ponchos in different places

The poncho styles change with different terrain and climate. They have also developed local characteristics and had different names. The popular ponchos in the Inca Empire are shorter with the style similar to both coats and ponchos, and are called "unku". The Guane who lived in Colombia and Venezuela had more thick and warm ones, called "Ruana", which are also another major style nowadays. The Mapuche people living near the border of Chile and Argentina call their ponchos "ponthro", which means "blanket". Theirs are knee-length and have good warmth retention.

During the Age of Discovery, Spain entered South America and began its colonial rule. The word "ponthro" was changed to the Western word "poncho" and unified. As Europeans brought silk and wool to Americas, there were more options for the material of the ponchos, but still mainly as alpaca wool. At the same time, with the introduction of European looms, ponchos had also been cut into circular European-styles such as round hats. The poncho culture had gradually expanded to the Central American, North American and European markets. 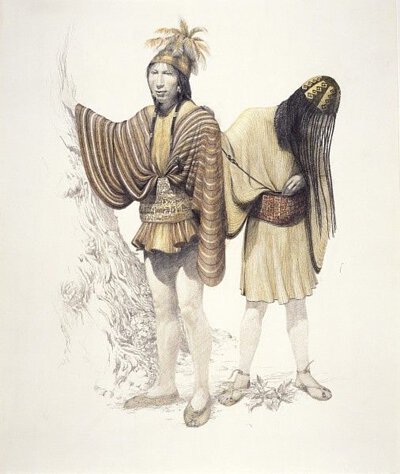 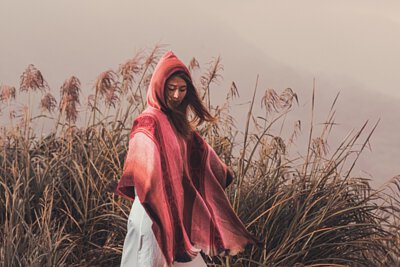 The poncho in European style, the design with hat  (Source: Sousoucorner)

The Andes mountain lies along the west coast of South America. It is the world’s longest mountain range on land. It is about 7,000 kilometers long, more than three times the length of the Himalayas, covering several countries including Colombia, Venezuela, Ecuador, Peru, Bolivia, Chile and Argentina. It is the birthplace of thousands of cultures. Its average altitude is higher than that of Mount Jade, the highest in Taiwan.  The different ethnic groups there, similarly, have to live with the severely cold weather.

The average height of Andes Mountains is 4,000 meters, and some peaks are covered with snow all year round. In the vast and cold plateaus, the Alpaca, with thick fur, is one of the few domesticated species that can survive in the mountains. Alpacas are native to the Andes Mountains of South America, mainly live in mountainous areas higher than 1,500 meters above sea level such as Peru, Ecuador, Bolivia, and Chile. There are about 3 million alpacas in the world, and more than 90% of them live in the Andes plateau of South America. They have been nurtured by humans for more than five thousand years since the Inca Empire. Before Europeans invaded the American continent, alpacas and their cousins, Llamas, were the only domesticated native livestock in South America. It can be used as meat source, fuel, clothing, and transportation. It is a symbol of Andean civilization and a manifestation of their lifestyle. 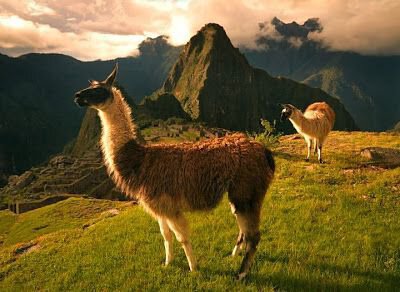 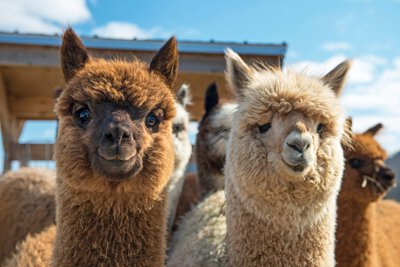 Andean Alpacas live in high, cold mountains and have a large amount of fur (Source: Metro)

To adapt to the climate of the Andes, the alpacas living in the mountains and plateaus have fur of hollowed hair fiber, so as to better keep warmth and breathability. The warmth is comparable to Kashmir wool. It has become a favorite wool for many international brands. In terms of durability, the fiber strength of alpaca wool can reach as much as three times of wool. It is one of the most abrasion-resistant fibers among all natural fibers. It is not easy to fluff and can be woven into high-durability practical clothing. Moreover, because the alpacas do not secrete sebum, it is not as irritating as the wool fiber containing lanolin. It is more popular with modern people who are prone to allergies.

The collection of Alpaca wool is labor-intensive. The softest and finest down suitable for use as clothing only grows on the side of the body, and only less than 1/3 of the fur can be used. The fur collected for the first time is called "baby alpaca". And when the removal is more frequent, the quality of the fur will decrease. Therefore, according to the regulations of the Peruvian government, alpaca wool can only be collected once every two to three years, which makes alpaca wool fabrics expensive. Many well-known brands sell their handmade pure alpaca wool ponchos at a market price of about ten to thirty thousand New Taiwan dollars. 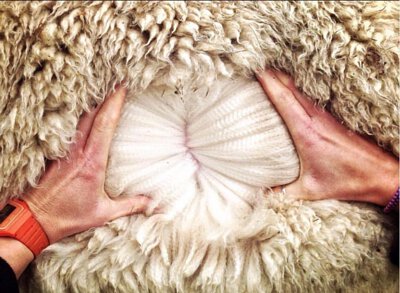 Alpaca down grows only on the side of the body, and the amount that can be used for each collection is very small. (Source: Quenti Alpacas &Mill) 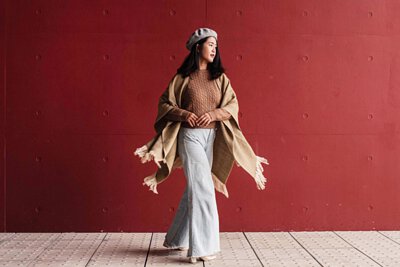 Alpaca wool is the favorite wool of many international brands. It is popular for its warmth and softness. (Source: Sousoucorner)

The South American Spirit and the Ponchos

The convenience and flexibility of the poncho makes it an indispensable equipment for the South American knights. The War of Independence broke out at the end of the 18th century in South America after years of Spanish rule. The poncho became a symbol of fighters for independence. The poncho presented by the Mapuche people to the hero, José de San Martín, accompanied him during liberation of Chile and Peru. The hero and the garment set an immortal record in history. 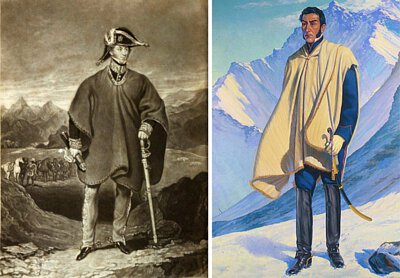 Ponchos were no longer limited to menswear, with the rise of hippie culture in the 1960s. Women began to wear ponchos. In modern times, the poncho has been widely regarded as a feature of South American culture. All men, women, aboriginals or foreigners can wear the traditional and fashionable ponchos in celebrations, parades, or daily life in South America.

The poncho has been integrated into life, culture, language and history of South American countries. One of the most authentic slang goes, "the place where the devil lost the poncho (Donde el diablo perdió el poncho.)" means "the end of the earth". When one is “not allowing others to step on his poncho” (No dejarse alguien pisar el poncho.)”, one is “unwilling to submit”. When “lifting the cloak (Poncho te levanta.)”, it means a time to start a revolution or uprise.